After its release by MGM in 2006, Lucky Number Slevin performed significantly better at the international box office than it did in the United States. In fact, international revenues were more than one-and-a-half times the US takings, and without them the film would have made a loss on its $27-million budget. Lucky Number Slevin’s popularity in Europe and several English-speaking countries helped boost the gross receipts to more than $56-million.

US critics and audiences tended to see the film as an overly complex attempt at a Pulp Fiction-style thriller. International audiences, it appears, recognised Lucky Number Slevin’s true pedigree: it’s more a stylish update of the sophisticated caper movies of the 50s and 60s. Gloriously overblown sets, snappy dialogue, a convoluted plot that keeps the audience on their toes from start to finish, explanatory flashbacks and multiple mind-boggling twists turn an already intriguing revenge tale into riveting cinema.

Stellar Cast in an Intricate Dance

Producers Chris Roberts and Kia Jam and director Paul McGuigan put together a strong cast of stars, including Stanley Tucci, Lucy Liu, Ben Kingsley, Morgan Freeman and Bruce Willis. In the lead role as Slevin Kelevra, they cast Josh Hartnett, capitalising on his status at the time as one of Hollywood’s hottest heartthrobs. This movie allowed him to transcend mere eye-candy status and show off his acting chops, however, and he gives an engaging performance as the supposed innocent with secret, steely depths that is by turns amusing and chilling.

Kingsley and Freeman play the Rabbi and the Boss, two mobsters who were once partners, but are now sworn enemies. They live in two impregnable fortified penthouses, facing each other across the street, as each plots the other’s demise. Bruce Willis plays Goodkat, an independent hitman who has worked for both mobsters for many years. Stanley Tucci is in typical top form as Detective Brikowski, the cop supposedly bent on bringing the mobsters down, but actually working his own crooked agenda.

Lucy Liu gives another fun performance as Lindsey, the nosy neighbour who turns into Slevin’s love interest. Although Josh Hartnett gets most of the screen time, Lucky Number Slevin is much more an ensemble piece than a star vehicle. Great actors in strong characters speaking excellent dialogue, most of it a pack of lies, are the key the film’s charm.

A Revenge 20 Years in the Making

Lucky Number Slevin’s credits and opening scene are something of a prologue, showing a seemingly unconnected series of random events that will only be demystified later. Two separate bookies are killed, and a young man shot by a sniper. Then Goodkat, although we don’t know his name yet, meets an unidentified stranger in a bus station, and tells him the story of a gambler who tried to cheat two mobsters on a horse race 20 years previously. The gambler was killed, along with his wife and child, as an example to others. Goodkat then kills the young man and leaves with his body.

In the next scene, Slevin is staying in his friend Nick’s New York apartment. After meeting Lindsey the neighbour and the two of them pondering Nick’s disappearance, Slevin is mistaken for Nick by two sets of henchmen in turn. He is taken to both the Boss and the Rabbi, with whom Nick has huge gambling debts, and forced, as Nick, to get involved in betting. But Goodkat and Slevin are playing their own game against both mobsters, as the various twists and flashbacks slowly reveal.

Reno, an Old Movie's Review for You

Thu Jun 18 , 2020
The film Reno is a 1939 black-and-white drama starring B-List stars from the RKO stable. Although Richard Dix, Gail Patrick, Anita Louise and the rest […] 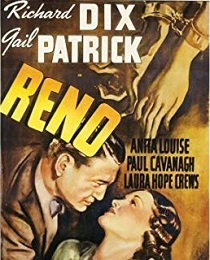